This is the most necessary exercise for
all kinds of voices. It was taught to my
mother; she taught it to all her pupils and
to us. But I am probably the only one of
them all who practises it faithfully! I do
not trust the others. As a pupil one must
practise it twice a day, as a professional
singer at least once. 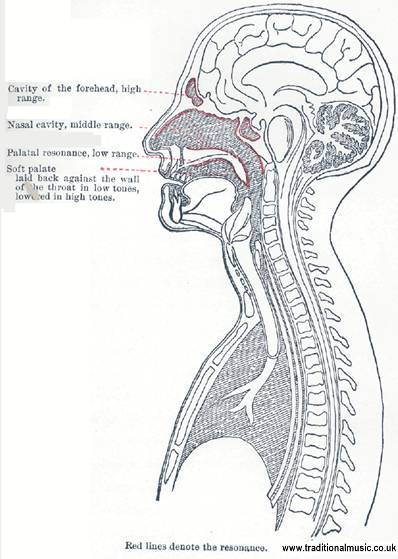 The breath must be well prepared, the
expiration still better, for the duration of
these five and four long tones is greater than
would be supposed. The first tone must be
attacked not too piano, and sung only so
strongly as is necessary to reach the next

one easily without further crescendo, while
the propagation form for the next tone is
produced, and the breath wisely husbanded
till the end of the phrase.

The first of each of the phrases ends
nasally in the middle range, the second
toward the forehead and the cavities of the
head. The lowest tone must already be
prepared to favor the resonance of the head
cavities, by thinking of a, consequently plac-
ing the larynx high and maintaining the
resonating organs in a very supple and elastic
state. In the middle range, ah is mingled
particularly with oo, that the nose may be
reached; further, the auxiliary vowel e is
added to it, which guides the tone to the
head cavities. In descending the attack must
be more concentrated, as the tone is slowly
directed toward the nose on oo or o, to the
end of the figure.

When oo, a, and e are auxiliary vowels,
they need not be plainly pronounced. (They
form an exception in the diphthongs,

" Trauuum," " Leiiid," " Lauuune," " Feuyer,"
etc.) As auxiliary vowels they are only
means to an end, a bridge, a connection
from one thing to another. They can be
taken anywhere with any other sound; and
thence it may be seen how elastic the organs
can be when they are skilfully managed.

The chief object of the great scale is to
secure the pliant, sustained use of the breath,
precision in the preparation of the propaga-
. tion form, the proper mixture of the vowels
which aid in placing the organs in the right
position for the tone, to be changed for every
different tone, although imperceptibly; further,
the intelligent use of the resonance of the
palate and head cavities, especially the latter,
whose tones, soaring above everything else,
form the connection with the nasal quality for
the whole scale.

The scale must be practised without too
strenuous exertion, but not without power,
gradually extending over the entire compass
of the voice; and that is, if it is to be per-

feet, over a compass of two octaves. These
two octaves will have been covered, when,
advancing the starting-point by semitones,
the scale has been carried up through an
entire octave. So much every voice can
finally accomplish, even if the high notes
must be very feeble.

The great scale, properly elaborated in
practice, accomplishes wonders: it equalizes
the voice, makes it flexible and noble, gives
strength to all weak places, operates to repair
all faults and breaks that exist, and controls
the voice to the very heart. Nothing escapes
it.

By it ability as well as inability is brought
to light — something that is extremely un-
pleasant to those without ability. In my
opinion it is the ideal exercise, but the most
difficult one I know. By devoting forty
minutes to it every day, a consciousness of
certainty and strength will be gained that ten
hours a day of any other exercise cannot give.

This should be the chief test in all conser-

vatories. If I were at the head of one, the
pupils should be allowed for the first three
years to sing at the examinations only diffi-
cult exercises, like this great scale, before they
should be allowed to think of singing a song
or an aria, which I regard only as cloaks for
incompetency.

For teaching me this scale — this guardian
angel of the voice — I cannot be thankful
enough to my mother. In earlier years I
used to like to express myself freely about
it. There was a time when I imagined that
it strained me. My mother often ended her
warnings at my neglect of it with the words,
" You will be very sorry for it! " And I was
very sorry for it. At one time, when I was
about to be subjected to great exertions, and
did not practise it every day, but thought it
was enough to sing coloratura fireworks, I
soon became aware that my transition tones
would no longer endure the strain, began
easily to waver, or threatened even to be-
come too flat. The realization of it was terri-

ble! It cost me many, many years of the
hardest and most careful study; and it finally
brought me to realize the necessity of exercis-
ing the vocal organs continually, and in the
proper way, if I wished always to be able to
rely on them.

Practice, and especially the practice of the
great, slow scale, is the only cure for all in-
juries, and at the same time the most excel-
lent means of fortification against all over-
exertion. I sing it every day, often twice,
even if I have to sing one of the greatest
roles in the evening. I can rely absolutely
on its assistance.

If I had imparted nothing else to my pupils
but the ability to sing this one great exer-
cise well, they would possess a capital fund of
knowledge which must infallibly bring them
a rich return on their voices. I often take
fifty minutes to go through it only once, for
I let no tone pass that is lacking in any de-
gree in pitch, power, and duration, or in a
single vibration of the propagation form.

Singers, male and female, who are lacking
velocity and the power of trilling, seem to me
like horses without tails. Both of these things
belong to the art of song, and are inseparable
from it. It is a matter of indifference whether
the singer has to use them or not; he must be
able to. The teacher who neither teaches nor
can teach them to his pupils is a bad teacher;
the pupil who, notwithstanding the urgent
warnings of his teacher, neglects the exer-
cises that can help him to acquire them, and
fails to perfect himself in them, is a bungler.
There is no excuse for it but lack of talent, or
laziness; and neither has any place in the
higher walks of art.

To give the voice velocity, practise first
slowly, then faster and faster, figures of

If one has well mastered the great, slow
scale, with the nasal connection, skill in sing-
ing rapid passages will be developed quite
of itself, because they both rest on the same
foundation, and without the preliminary prac-
tice can never be understood.

Put the palate into the nasal position, the
larynx upon ce; attack the lowest tone of the
figure with the thought of the highest; force
the breath, as it streams very vigorously forth
from the larynx, toward the nose, but allow
the head current entire freedom, without en-
tirely doing away with the nasal quality; and
then run up the scale with great firmness.

In descending, keep the form of the
highest tone, even if there should be eight
to twelve tones in the passage, so that the
scale slides down, not a pair of stairs, but a
smooth track, the highest tone affording, as
it were, a guarantee that on the way there
shall be no impediment or sudden drop.

The resonance form, kept firm and tense,
must adapt itself with the utmost freedom
to the thought of every tone, and with it,
to the breath. The pressure of the breath
against the chest must not be diminished,
but must be unceasing.

To me it is always as if the pitch of
the highest tone were already contained in
the lowest, so strongly concentrated upon the
whole figure are my thoughts at the attack
of a single tone. By means of ah-e-a,
larynx, tongue, and palatal position on the
lowest tone are in such a position that the
vibrations of breath for the highest tones
are already finding admission into the head
cavities, and as far as possible are in sym-
pathetic vibration there.

The higher the vocal figures go the more
breath they need, the less can the breath
and the organs be pressed. The higher they
are, the more breath must stream forth from
the epiglottis; therefore the a and the
thought of e, which keep the passages to

the head open. But because there is a limit
to the scope of the movement of larynx and
tongue, and they cannot rise higher and
higher with a figure that often reaches to
an immense height, the singer must resort
to the aid of the auxiliary vowel oo, in
order to lower the larynx and so make
room for the breath:

A run or any other figure must never
sound thus: 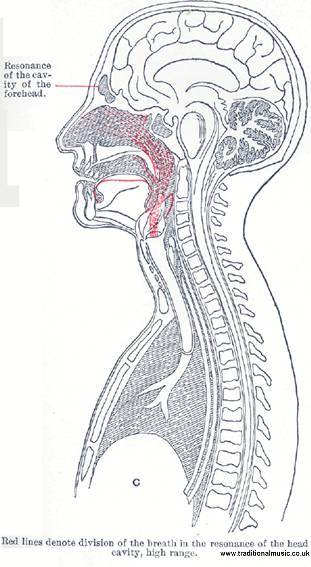 but must be nasally modified above, and
tied; and because the breath, mnst flow out
unceasingly in a powerful stream from the
vocal cords, an h can only be put in beneath,
which makes us sure of this powerful stream-
ing out of the breath, and helps only the

branch stream of breath into the cavities of
the head. Often singers hold the breath,
concentrated on the nasal form, firmly on
the lowest tone of a figure, and, without
interrupting this nasal form, or the head
tones, that is, the breath vibrating in the
head cavities, finish the figure alone. When
this happens the muscular contractions of the
throat, tongue, and palate are very strong. 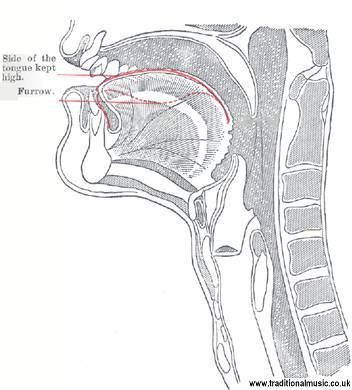 The turn, too, based on the consistent con-
nection of the tonal figure with the nasal
quality, — which is obtained by pronouncing
the oo toward the nose, — and firmly held
there, permits no interruption for an instant
to the vowel sound.

How often have I heard the ha-ha-ha-haa,

etc., — a wretched tumbling down of different
tones, instead of a smooth decoration of the
cantilena. Singers generally disregard it,
because no one can do it any more, and yet
even to-day it is of the greatest importance.
(See Tristan und Isolde.)

The situation is quite the same in regard to
the appoggiatura. In this the resonance is
made nasal and the flexibility of the larynx,
— which, without changing the resonance,
moves quickly up and down — accomplishes
the task alone. Here, too, it can almost be
imagined that the thought alone is enough,
for the connection of the two tones cannot
be too close. But this must be practised, and
done consciously. 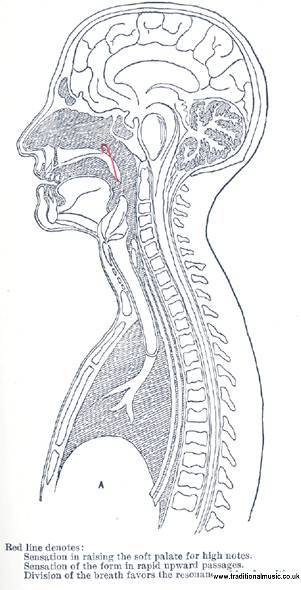