EXTENSION OF THE COMPASS AND EQUALIZATION OF REGISTERS

The whole secret of both consists in the
proper raising and lowering of the soft palate,
and the pillars of the fauces connected with
it. This divides into two resonating divi-
sions the breath coming from the source
of supply, and forced against the chest,
whereby it is put under control, as it escapes
vocalized from the larynx. It consists also
in the singer's natural adaptability and skill,
in so placing the palate and resonance of the
head cavities, or keeping them in readiness
for every tone, as the pitch, strength, and
duration of the individual tones or series
of connected tones, with their propagation
form, shall demand.

Big voices, produced by large, strong
organs, through which the breath can flow in
a broad, powerful stream, are easily disposed
to suffer from the tremolo, because the out-
flow of the breath against the vocal cords
occurs too immediately. The breath is sent
directly out from the lungs and the body,
instead of being driven by the abdominal
pressure forward against the chest and the
controlling apparatus. Not till this has been
done, should it be admitted, in the smallest
amounts, and under control to the vocal
cords. It does not pause, but streams through
them without burdening them, though keep-
ing them always more or less stretched, in
which the muscular power of contraction
and relaxation assists. Streaming gently out

from the vocal cords, it is now led, with the
support of the tongue, to its resonance cham-
bers, all the corners of which it fills up
equally. Even the strongest vocal cords
cannot for any length of time stand the
uncontrolled pressure of the breath. They
lose their tension, and the result is the
tremolo.

In inhaling, the chest should be raised
not at all or but very little. (For this rea-
son exercises for the expansion of the chest
must be practised.) The pressure of the
breath against the chest must be main-
tained as long as it is desired to sustain a
tone or sing a phrase. As soon as the press-
ure of the abdomen and chest ceases, the tone
and the breath are at an end. Not till tow-
ard the very end of the breath, that is,
of the tone or the phrase, should the press-
ure be slowly relaxed, and the chest slowly
sink.

While I am singing, I must press the
breath against the chest evenly, for in this

way alone can it be directed evenly against
the vocal cords, which is the chief factor
in a steady tone and the only possible and
proper use of the vocal cords.

The uninterrupted control of the breath
pressure against the chest gives to the tone,
as soon as it has found a focal point on the
raised palate at the attack, the basis, the
body, which must be maintained even in
the softest pianissimo. Control of the breath
should never cease. The tone should never
be made too strong to be kept under control,
nor too weak to be kept under control.
This should be an inflexible rule for the
singer.

I direct my whole attention to the pressure
against the chest, which forms the door of
the supply chamber of breath. Thence I
admit to the vocal cords uninterruptedly only
just so much as I wish to admit. I must
not be stingy, nor yet extravagant with it.
Besides giving steadiness, the pressure against
the chest (the controlling apparatus) estab-

lishes the strength and the duration of the
tone. Upon the proper control depends the
length of the breath, which, without inter-
ruption, rises from here toward the resonat-
ing chambers, and, expelled into the elastic 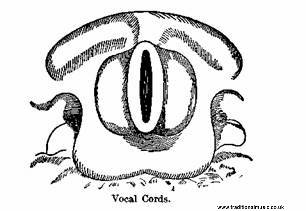 form of the resonating apparatus, there must
obey our will.

It can now be seen how easily the vocal
cords can be injured by an uncontrolled
current of breath, if it is "directed against
them in all its force. One need only see a
picture of the vocal cords to understand the
folly of exposing these delicate little bands

to the explosive force of the breath. They
cannot be protected too much; and also, they
cannot be too carefully exercised. They
must be spared all work not properly theirs;
this must be put upon the chest tension
muscles, which in time learn to endure an
out-and-out thump.

Even the vibrato, to which full voices are
prone, should be nipped in the bud, for
gradually the tremolo, and later even worse,
is developed from it. Life can be infused into
the tone by means of the lips—that is, in a
way that will do no harm. But of that later.

Vibrato is the first stage, tremolo the
second; a third and last, and much more
hopeless, shows itself in flat singing on the
upper middle tones of the register. Refer-
able in the same way to the overburdening
of the vocal cords is the excessive straining
of the throat muscles, which, through con-
tinual constriction, lose their power of elastic
contraction and relaxation because pitch and
duration of the tone are gained in an in-

correct way, by forcing. Neither should be
forced; pitch should be merely maintained,
as it were, soaring; strength should not be
gained by a cramped compression of the
throat muscles, but by the completest pos-
sible filling with breath of the breath-form
and the resonance chambers, under the gov-
ernment of the controlling apparatus.

Neglect of the head tones (overtones) is
paid for dearly.

The more violent exertions are made to
force them, and to keep them, the worse
are the results. For most of the unhappy
singers who do this, there is but one result:
the voice is lost. How pitiful!

If the first and second stages of tremolo
are difficult to remedy, because the causes
are rarely understood and the proper meas-
ures to take for their removal still more
rarely, the repair of the last stage of the
damage is nothing less than a fight, in which
only an unspeakable patience can win the
victory.

There are no magic cures for the singer.
Only slowly, vibration upon vibration, can
the true pitch be won back. In the word
"soaring" lies the whole idea of the work.
No more may the breath be allowed to flow
uncontrolled through the wearied vocal cords;
it must be forced against the chest, always,
as if it were to come directly out thence.
The throat muscles must lie fallow until
they have lost the habit of cramped con-
traction ; until the overtones again soar as
they should, and are kept soaring long,
though quite piano. At first this seems
quite impossible, and is indeed very diffi-
cult, demanding all the patient's energy.
But it is possible, and he cannot avoid it,
for it is the only way to a thorough cure.

The patient has an extremely disagreeable
period to pass through. If he is industrious
and careful, he will soon find it impossible
to sing in his old way; but the new way
is for the most part quite unfamiliar to
him, because his ear still hears as it has
previously been accustomed to hear. It may
be that years will pass before he can again
use the muscles, so long maltreated. But
he should not be dismayed at this prospect.
If he can no longer use his voice in public
as a singer, he certainly can as a teacher —
for a teacher must be able to sing well. How
should he describe to others sensations in
singing which he himself never felt ?• Is it
not as if he undertook to teach a language
that he did not speak himself ? or an instru-
ment that he did not play himself? When
he himself does not hear, how shall he teach
others to hear ?

The degree of the evil, and the patient's
skill, naturally have much to do with the
rapidity of the cure. But one cannot throw

off a habit of years' standing like an old
garment; and every new garment, too, is
uncomfortable at first. One cannot expect
an immediate cure, either of himself or of
others. If the singer undertakes it with
courage and energy, he learns to use his
voice with conscious understanding, as should
have been done in the beginning.

And he must make up his mind to it, that
even after a good cure, the old habits will
reappear, like corns in wet weather, whenever
he is not in good form physically. That
should not lead to discouragement; persist-
ence will bring success.

As I have already said, singers with dis-
abled voices like best to try " magic cures " ;
and there are teachers and pupils who boast
of having effected such magic cures in a few
weeks or hours.

Of them I give learning ! and equally, of
unprincipled physicians who daub around in
the larynx, burn it, cut it, and make every-
thing worse instead of better.

I cannot comprehend why singers do not
unite to brand such people publicly and put
an end to their doings once for all.

There is no other remedy than a slow, very
careful study of the causes of the trouble,
which in almost all cases consist in lack of
control of the stream of breath through the
vocal cords, and in disregard of the head
tones, that is, of the over-tones; as well as
in forcing the pitch and power of the tone
upon a wrong resonating point of the palate,
and in constricting the throat muscles. In
these points almost invariably are all mis-
takes to be looked for; and in the recognition
of them the proper means for correcting them
are already indicated.

The cure is difficult and tedious. It needs
an endless patience on the part of the suf-
ferer as well as of the physician — that is, of
the pupil and the singing teacher (the only
proper physician for this disease) — because
the nerves of the head are already sufficiently
unstrung through the consciousness of their

incapacity; yet they should be able to act
easily and without effort in producing the
head tones.

The repairing of a voice requires the great-
est sympathetic appreciation and circumspec-
tion on the part of the teacher, who should
always inspire the pupil with courage; and
on the part of the pupil, all his tranquillity,
nervous strength, and patience, in order to
reach the desired goal.