What is a Barlow Knife

The names of everyday items in song titles. 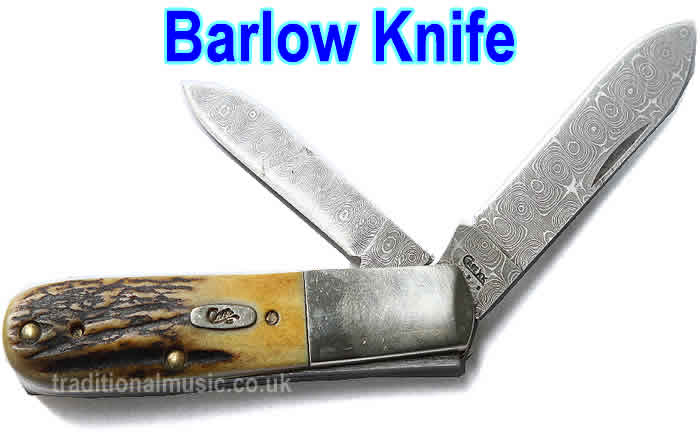 I have added this page as an interesting example of how the name of an everyday object can appear in a tune title. Although apparently an English invention, most people in England would claim to have never heard of the Barlow Knife. The fact that it finds itself as the title of an American tune suggests that it was probably a more popular item there than in England. One can only speculate how the author of the tune came to choose it as the title. The following description was kindly provided by Dave Navoyosky The term "Barlow" has two meanings when it comes to pocket knives.  First, it is a style of pocket knife.  Second, there is a Barlow company in the USA that makes and imports pocket knives, key tags, money clips, and other quality gift products, and puts your logo on them.  If you are looking for either of these two "Barlow" destinations, you have come to the right place.

What is a "Barlow" style pocket knife?  A barlow style knife has one or two blades, a huge metal bolster, and a comfortable tear-drop shaped handle. The blade or blades are attached at the small end of the handle.  Even though the first barlow knife was made in Sheffield England in the 1600's, it was made by several American shops soon after, and has become just as American as "apple pie".  George Washington was known to have a barlow knife.  Mark Twain referred to a "real Barlow" in his Tom Sawyer and Huckleberry Finn in 1876.  Barlows have long been gifts, treasured by young American boys. The history of the barlow knife has been difficult to trace.  At least four American Barlow families have claimed that they invented the barlow knife.  According to Laurence A. Johnson in his article, "The Barlow Knife", that was published in The Chronicle of the Early American Industries Association, Inc. in June 1959, the Barlow knife was probably first manufactured by Obadiah Barlow at Sheffield, England, around 1670. Obadiah's grandson, John Barlow, joined the business around 1745 and it was he who was chiefly responsible for developing the exportation of the Barlow knives to America. Another source says the barlow knife was also made by Luke Furnace of Stannington, which in the eighteenth century was a small village on the outskirts of Sheffield. Luke Furnace's name occurs in the Sheffield directories from 1774 and 1787, but not in the 1797 directory, so he was presumably dead by then. He probably adopted the mark "1760" because that was the year he obtained the freedom of the Cutler's Company. The original Barlow, after whom the knives are named, was working in Sheffield at the same time as Luke Furnace.  < The barlow knife was designed to be tough, and to be affordable.  The keep the price low, the blade was high carbon steel, and the handle was bone, and not much time was spent in polishing it.  To make it tough, the bolster was big and thick.  The original  barlows had only one blade.  Now they have two,  and more care is taken in finishing and polishing them.

John Russell may have been the first American to manufacture Barlow knives. The John Russell Company, now the Russell Harrington Cutlery Company of Southbridge, Massachusetts, first made Barlow knives at their Greenfield Massachusetts, factory in 1785. They were called the Russell Barlow knife and instead of the word BARLOW on the bolster, they were stamped with Russell's mark, an R with an arrow through it. Today these Russell Barlows are valuable antiques.

Now several companies make barlow knives, and they are sold on this web page:

Do you know that the small pocket stitched into the right hand pocket of Levi Jeans used to be called the Barlow pocket? This was a pocket actually intended to carry a folding pocket knife ( NOT a plastic butane lighter!). The barlow knife was the knife of choice for outdoor workers, as it was solid and dependable. I first heard about this Barlow pocket back in the late 1960s from a representative of F.G.Gertler, the original British importers of Levi jeans. The jeans were designed to be working trousers for rough farm and range use back in the 19th century, and the addition of this little pocket was useful for workers and riders. They could retrieve the knife without standing or having to dismount. At one point Levis also made artisans jeans for carpenters, builders etc, and these also had an additional long pocket down the lower outside seam of the leg designed to hold a folding wooden rule. The lower leg was used, as most workers rode horses, drove carts or climbed ladders and needed to be able to bend their leg easily. Back in the 60s, levis were so heavy duty and full of starch when new ( they were actually delivered in bales of 12 held by steel straps and cost the equivalent of Ł3 then) that we used to display them in the shop window standing up on their own, one only had to form the legs into tubes to achieve this! They shrunk enormously when washed, so one had to buy them at least one size larger to allow for this. So there we are, a little more history of the Barlow knife and also of workers clothing of the 19th century period. I still actually carry my Swiss Army Knife in this pocket today.

The use of such titles from the things events and people of everyday life is quite common in traditional music. Titles such as "Langstrom's Pony", "Maggie Brown's Favourite", "Wreck Of The Old Ninety Seven", "Poor Ellen Smith", "Little Rabbit", "Cricket On The Hearth", "Pipe On The Hob" are part of the charm of traditional music and hark to times when false sophistication and cleverness were not the norm in titles, and music and entertainment was mostly created by "real people" for their own, and their neighbours entertainment. Today you are more likely to find bands with names like "Cradle of Filth", you can probable guess the sort of titles they give their numbers - right - not very uplifting.